Love, by Clarice Lispector, follows the character Ana in the fatal outcome of her routine: in possession of the groceries that she bought at the market, the character heads towards her home; however, when contemplating a blind man chewing gum at a tram stop, Ana finds herself detached from the whole social, psychological, and spiritual web that, before, kept her life in apparent order.

The reader should pay attention to what is implied in the story: Ana, a character with the typical depth of Clarice’s female characters, finds herself trapped in different social roles (which we could very well call institutions). Such roles, of which the role of being a mother stands out, in a way shelters Ana from the “silent light of existence”, the essential rawness of the world. Writing in stream of consciousness, a method so dear to the Brazilian author, Clarice explores in this short story the dissolution of these institutions: an experience that is very similar to the satori of the Buddhist religion.

The blind man at the tram stop may well be the subject to a wide debate, regarding his symbolism: what did Ana see in the blind man? What does he represents? For the purposes of this review, and evidencing the author’s own interpretation, it should be clear: the blind man doesn’t matter. That trigger, in Ana’s life, could have occurred in any other situation: if Ana was contemplating the changing colors of the sunset; if she was awake amidst a night of insomnia; or even, if someday she accidentally hit her big toe in the doorway. The life that Ana led called for this sort of catharsis. It was about to happen, and the only symbolism in the story worth of being commented, is this: Ana was alone, returning to her family. In this transitional period, while she was contemplating the city through the tram window, she suddenly found herself embodied in her own individuality – and with it, faced existence in its rawest form, without breaking eye contact.

Ana then gets off the tram and walks around the city, in a mixture of confused feelings, which vary between finding her way back home and contemplating nature in the Botanical Garden. In the latter, Clarice describes a beautiful painting: the reader can see the landscape of the Botanical Garden with Ana’s eyes, now purified, too distant from her social role, only living to contemplate (and also suffer), in a state that Aldous Huxley would call “[the] blessed Not-I, released for a moment from my throttling embrace”.

However, Ana’s experience isn’t just flowers. The overwhelming contact with the nature of existence puts her in a fine line between beauty and existential crisis. Upon returning to her home, Ana, the mother, still detached from this primordial role, is faced with her son. And the question arises: “How to transmit safety to a child, when, in fact, there is no such thing as safety?”

Most of what is experienced by Ana, in fact, exists too far from the reach of language. It is only felt in its integrity by someone who faced the relentlessness and rawness of life, in its fullest form. All that can be said is that Clarice’s sensitivity, in Love, reaches a rare level: creating a story that seems to contain the synthesis of a primordial experience, which few could explain – but everyone, at different levels, can understand.

Through the silent streets in the city asleep

In one single movement

Echo in the wild urban sparkle

Captive of an irreciprocal passion

Follows the path of those who’ve already gone

No stars in the sky but where there is to see

They crowd in contained supernova

Nobody forces them to stay together

Connect with the same ease that they separate

Life flows on the curb

Affluent of the concentrated supernova

In shades of all colors

By the intermingling of the silent presence of the buildings

Unaware of its own meaning

“Ghostses!” yelled little Lou amazed. He really agreed with me but he was afraid of my insistence on “Ghostses.”

“Look,” said my brother-in-law, “if things were empty how could I feel this orange, in fact taste it and swallow it, an­swer me that one.”

“Your mind makes out the orange by seeing it, hearing it, touching it, smelling it, tasting it and
thinking about it but without this mind, you call it, the orange would not be seen or heard or smelled or tasted or even mentally noticed, it’s actually, that orange, depending on your mind to exist! Don’t you see that? By itself it’s a no-thing, it’s really men­tal, it’s seen only of your mind. In other words it’s empty and awake.”

“Well, if that’s so, I still don’t care.” All enthusiastic I went back to the woods that night and thought, “What does it mean that I am in this endless universe, thinking that I’m a man sitting under the stars on the terrace of the earth, but actually empty and awake throughout the emptiness and awakedness of every­thing? It means that I’m empty and awake, that I know I’m empty, awake, and that there’s no difference between me and anything else. In other words it means that I’ve become the same as everything else. It means I’ve become a Buddha.” I really felt that and believed it and exulted to think what I had to tell Japhy now when I got back to California. “At least he’ll listen,” I pouted. I felt great compassion for the trees because we were the same thing; I petted the dogs who didn’t argue with me ever. All dogs love God. They’re wiser than their masters. I told that to the dogs, too, they listened to me perking up their ears and licking my face. They didn’t care one way or the other as long as I was there. St. Raymond of the Dogs is who I was that year, if no one or nothing else.

Sometimes in the woods I’d just sit and stare at things themselves, trying to divine the secret of existence anyway.

Being a bilingual writer comes with its hurdles. Well, claiming this may sound a little pretentious, but it is nonetheless true. Of course there’s the obvious advantage: a bilingual writer is able to convey ideas in two different systems of meaning; this, in an authoral sense, means that the creative output of said writer can be way more diverse than the output of a writer who only works with a single language. Also, professionally speaking, this feat gives said writer a much more wider array of opportunities in his professional ventures.

But, talking specifically about  the process of creation, the multilingual feat can be the source of a great deal of confusion for a writer.

In my case, my native language is Portuguese; as I still live in a portuguese-speaking country, I use it in the day to day business. In addition, ever since I was a child, I am fluent in the English language: and this is where the impasse begins.

As of lately, I  have been reading solely in the English language – for many reasons. I love American authors (especially American poets like Whitman, Ginsberg, …), and since I could read English pretty well since a young age, I plunged right into the originals. This has been nothing but a immense joy to me; being able to read Whitman’s work in the language it’s supposed to be read is a whole different experience than to read his translated works. It is no wonder that there’s this common saying among translators, that “In order to translate the works of a poet, another poet is needed”.

So, as these readings are dicothomic – I read both as an enjoyment and as an improving tool to my writing –, in my head, most of my literary inspirations are coded in the English language; while my perception of the world, and everyday thoughts and dialogs are in Portuguese.

This might result in some confusion: as I am working on my authoral texts, there can be some conflicts between those languages. Sometimes, let’s say, the idea I want to conceive makes sense in English, but I am working in a piece which is in Portuguese. If I try to translate the idea to the other language, the magic of the words die out. The phrase may still be grammatically correct, and even have the same “meaning”; but the “feel” of the idea is totally different. It amazes me how two languages can express the same idea in a whole different sense.

One day I will find the right words, and they will be simple. 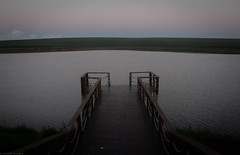